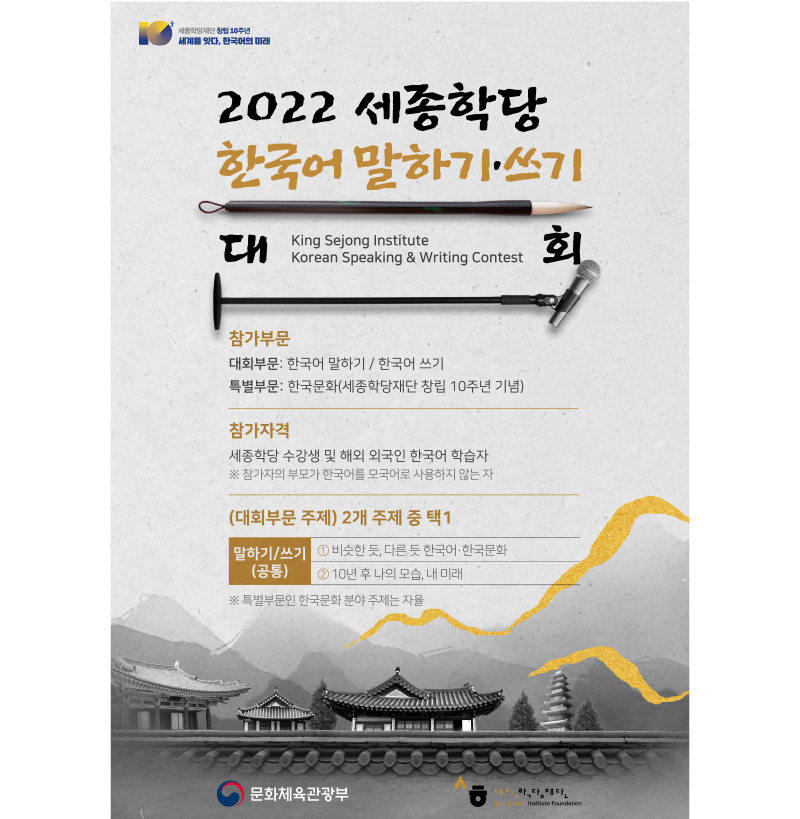 Starting in May, KSIF will be conducting its ‘KSI Speaking & Writing Contest’ preliminary rounds at all of its global locations in order to select outstanding KSI learners of 2022.

The ‘KSI Speaking & Writing Contest’ is held annually beginning every May in celebration of King Sejong’s birth. It has become an event that represents KSI seeing the participation by KSI students and Korean learners from around the globe. The contest begins with preliminary rounds held at all of KSI’s global locations, and those who advance to the finals will compete in Korea following an evaluation process conducted by the Foundation.

In celebration of the Foundation’s 10th anniversary, this year’s contest will include a specially added ‘Korean culture’ section to the existing Speaking and Writing sections. Also, the finalists who advance from the preliminary rounds will be provided an opportunity for a training program in Korea as ‘outstanding learners,’ with all prize winners being given a chance to study Korean at distinguished Korean universities in 2023.

The preliminary rounds of the Speaking & Writing contest will be held between May and July at all KSI’s global locations. Participants can choose from two topics, which are identical across the sections. The topics are ‘Similar yet different - Korean & Korean culture,’ and ‘My future - 10 years from now,’ through which participants will get a chance to think about where they will be 10 years in the future.

The newly added ‘Korean culture’ section has also been welcomed with great interest at all KSI locations. KSI students are expected to demonstrate their excellent knowledge in Korean culture, which they have acquired through the different Korean culture programs, such as the Sejong Culture Academy or the Culture Internship Program. Students can participate in this section as either individually or as a group.

President LEE Hae-Young of KSIF says, “The KSI Speaking & writing Contest, which first started in 2014, has now established its foothold as a representative Korean proficiency contest. I cannot be more excited to meet the outstanding students in person now that the pandemic has subsided.”

The 2022 KSI Speaking & Writing Contest is expected to take another leap forward. As anyone with any level of Korean proficiency can participate in the contest, the interest and participation of all foreign Korean learners around the globe are encouraged.